Australian homeowners are advised every day by the government to plant trees for a better environment, pollution control and a ton of other reasons. It’s a moral thing too for some: Why do you have to cut down a tree, why not maintain and plant more?

But a tree is not always forever. They often need to be cut down and removed. The underlying question for most homeowners then becomes: “how do I know it’s time to remove a tree from my yard?”

You will know it’s time to take a tree down if/when;

If it has outgrown its space

Even with regular pruning and maintenance, some trees grow so fast that they expand out of their boundaries in a short time, intruding on the area around them. Once you identify a tree that is no longer fitting in its location or has long branches that can no longer be pruned, have it marked for removal.

If a large part of it is damaged, especially the branches

A tree may suffer damage as a result of a number of factors. Weather extremes, for example, are a major cause for tree damage across Australia. You can always identify a damaged tree by inspecting its branches. If they are dead or dried up, especially in the upper parts of the tree, it is a signal of damage resulting from somewhere below the surface.

Other signs include the presence of powdery mildew or fungus on tree branches. This kind of tree is bound to die after some time and the best way to avoid damage is by having it removed professionally and early.

When its roots start damaging nearby buildings, driveways etc

As trees grow, their roots increase in length and continue to grow either vertically or horizontally within the ground. Over time, this growth may have the roots find their way under houses, pavements and driveways, damaging them in the process.

This is especially true for houses with trees in close proximity. Such roots can easily damage the foundations of a house or dismantle a driveway. Underground pipes and cables are also vulnerable to damage from expanding root systems. With this situation on your hands, your best option is to identify the tree causing the damage and have it removed immediately.

If the tree trunk develops deep cavities and major cracks

Severe damage to the tree trunk almost always means the tree has to be removed. Only when cracks in the trunk cover less than 25% of the circumference can the tree be expected to heal on its own.

Deep cavities from cut-out branches, wide cuts that go deep inside the bark and vertical seams that cover a large expanse of the tree circumference are a sign of internal decay. This means that the tree is dying and should be taken down safely and quickly.

When the tree starts leaning at an abnormal angle

A leaning tree is easy to notice, thankfully. Once a tree starts to appears to be at an unusual angle, it is a sign of a lack of support from one side of the root system, which easily translates to damage in the roots.

Such a tree is a threat and may come tumbling down to the ground unexpectedly. If one such tree is present in your yard, it is high time you took it down safely before a rain storm does the job haphazardly for you and causes damage.

If its root structure is rotting

Some trees have a section of their root system visible and above the soil surface. In the case of damage to the root system by insects or decomposition, the easiest sign you can look out for is rotting of the roots. If this happens to any of the trees on your property, quickly mark it for removal.

Such trees gradually lose their firmness in the ground and may fall unexpectedly. If the rotting is a result of a contagious disease, they might also spread infections to neighbouring trees. 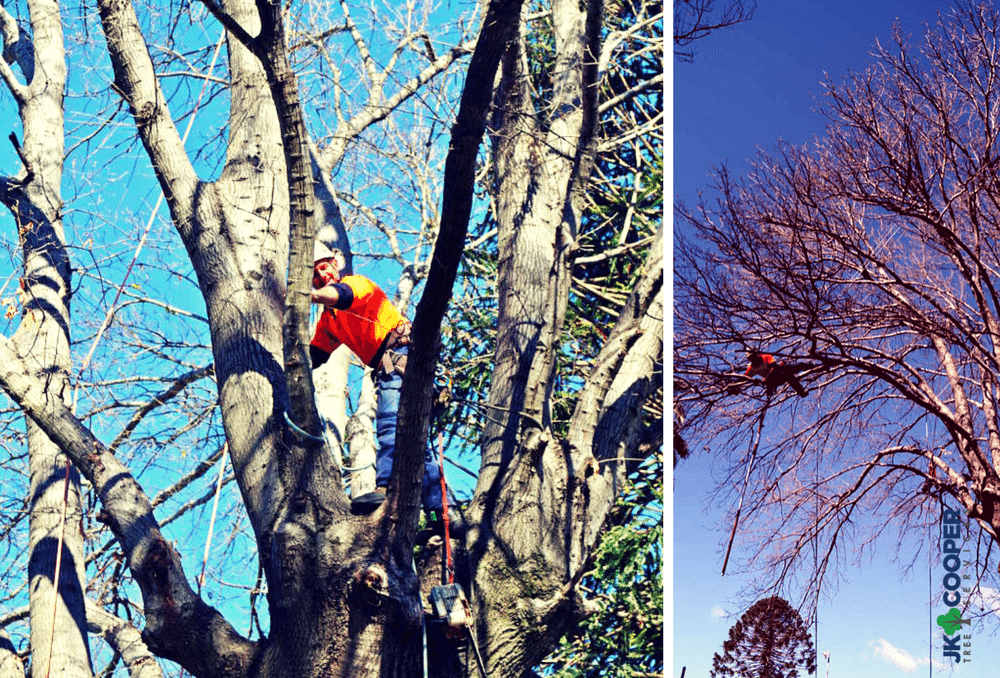 Now, this is a dangerous one. Widespread blackouts and fires have been caused in various Australian towns by damage to electric poles and wires as a result of interference by overgrown trees.

With extremely tall tree breeds, trees may grow until they come into contact with electricity wires. Others with longer branches may expand in width until they interfere with electricity poles and wires alongside them. Identify any trees that are a threat to electrical wires or poles and have them removed.

When it’s growing too close to the house

In this case, the possible dangers you can expect include cracking up of the house foundations by root intrusion and water getting into the house when it rains. It might also be blocking a vital point of entry or source of ventilation or damaging the pipes that bring your utilities. Such a tree is dangerous and, once identified, should be removed immediately.

If the tree is increasing in hollowness

If a third or more of a tree’s interior is hollow, mark it for removal. Hollowness results from a number of factors, chief among them rotting within the trunk. Hollow trees can live for long, mainly because their nutrient supply system between the leaves and the roots lies in the outer parts of the trunk, not the inside.

But hollowness is a sign of a tree’s deteriorating physical ability, and those identified to be increasing in hollowness should be removed. Their stability and firmness are low, which can be very dangerous.

This is a direct indication of the action of insects on the tree and its roots. A number of small destructive animals and insects are known to live in big tree trunks, which they feed on in addition. Such action not only weakens the trunk over time, but also weakens the tree’s firmness from below, rendering it unstable and unfit to be left standing.

Finally, do not be scared to take down a tree if it has any of these signs. For safety purposes, hire professional service providers to pull down the tree for you and chemically treat or uproot the stump after.